Fred Delventhal works as senior level Instructional Technology Coordinator for Arlington Public Schools in Virginia. Originally from Michigan, Fred studied Education at Eastern Michigan University including two minors in Teaching of Elementary Math and Teaching Science. He has a Bachelors degree in Social Sciences and a minor in Business. In 1996, he graduated from Marymount University with a Masters Degree in Elementary Education. He has presented at National Educational Computer Conference now called ISTE, Northern Virginia Technology Educational Consortium conferences, the Technology and Learning Symposia (Virginia), and the Virginia Department of Education Educational Technology Leadership Conference. Fred has worked as an adjunct professor for George Mason University Instructional Technology Certificate Program, the Four Rivers Consortium (Virginia), and most recently for the University of Maryland, Baltimore County.

In 1996, Fred joined Arlington Public Schools in the first group of Instructional Technology Coordinators. In 2006, he joined the Barrett staff when Barrett Elementary School became a NASA Explorer School. Fred, along with a group of Barrett teachers, flew with NASA conducting experiments designed by students in microgravity in 2007.

The year 2007 proved to be a big year for Fred. He was instrumental in his leadership role and also conducting workshops and presenting internationally to educators in the virtual world, Second Life. He grew his professional learning network being an early adopter of social media, seeing the power Twitter could have in connecting with other educators outside of the Arlington district.

In 2009, Fred became a Google For Education Certified Innovator and was named one of the educational leaders of the year by the Discovery Educator Network. In 2011 Fred was one of the recipients of Discovery Education’s Professional Learning DEN award.

Fred served as a co-host of two popular educational podcasts, The Google Educast and Toolzeit on the EdReach Network.

Google labeled him as a Google Search Expert in 2013. Fred joined Google’s Product Expert program in 2015 and was a top contributor in the Google Workspace for Education Forum. He was also a member of the G Suite for Education Experts team.

In his spare time he enjoys cooking, watching futbol/soccer, photography, and exploring new places both near and far. He has two dogs, Barca and Spurs. 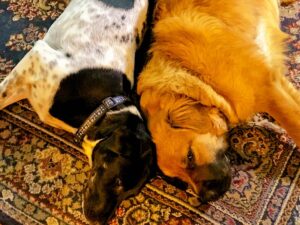 @BarrettAPS
RT @KWBAbbyCrain: We learned about the many different ways that our Earth changes! Stop by to read our informative brochures & booklets! #k…
Published February 06, 23 11:29AM